Today we will talk about Apistogramma bitaeniata, a wonderful highly poly-chromatic species with a quite awkward behavior!

A. bitaeniata has a wide distribution: it could be found in Perù, Colombia and Brasil, in Rio Ucaya, Rio Nanay. Rio Ampiyacu (Perù), in the region near Leticia (Colombia) and in Rio Madeira, Rio Solimoes and Lake Tefé (Brasil).

A. bitaeniata lives in shallow streams with a very slow flow. The river bed of these small channels is fully covered by a deep litter of dead leafs and branch: decomposing, all this organic matter releases tannins and humic acids which give to the water a quite dark black color and a very high acidity.

Another typical characteristic of the original habitat is that the substrate is composed mainly by fine sand, mud and decomposed organic matter/detritus, indeed the mouth of this cichlids (such as all the others member of the Apistogramma genus) evolved to sift the sand through the gills, looking for food.

Some pics by Tom Christoffersen of the Peruvian part of the Rio Nanay where he collected some specimens of A. bitaeniata:

And in the Rio Ampiyacu drainage:

The scientific name of this awesome cichlid comes from Latin; ‘bi’ stands for “double” and “taenia” for “stripe/belt” (in fact one of the common/commercial name of A. bitaeniata is two striped Apisto).

This appellation fits perfectly because, unlike many others Apistogramma, A. bitaeniata presents a second stripe under the main lateral band; this band origins from the gill and ends just under the caudal spot. It can be more or less visible in relation to the humor/behaviour of the fish; the second stripe is presented both in males and females.

Pics of male and female where the two stripes are clearly visible:

As mentioned in the introduction another feature of this species is the high poly-chromatism, particularly evident in male specimens, so much that the patterning/colouration feature is not a decisive trait to identify the location of the specimens.

As we could see from the following pictures, Apistogramma bitaeniata males can present different color pattern, appreciable in particular on the ventral, caudal and dorsal fins.

As well as in the entire Apistogramma genus, the male is considerably larger than the female and shows brighter colors with a lyrate caudal fin against the female specimens that present the caudal fins without extensions and a magnificent lyre-tail with prominent extensions, absent in females.

Noteworthy is the fact that, contrary to other Apistos, the ventral fins of the female of A. bitaeniata end with a hint of extension of neutral/white color; however, nothing comparable to the extensions of the male’s ventral fins, that could reach and overcome two cm and that can show colors ranging from blue to orange (depend from the poly-chromatism of the species).

Moreover, the male shows the first three or four rays of the dorsal fin elongated and a coloration pattern composed by longitudinal bands, alternating a yellowish band (at the base of the fin) to blueish (in the body of the fin) to terminate with again a yellowish color.

Male and female in comparison: 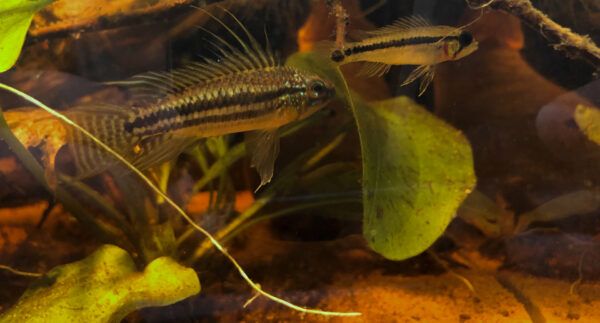 Apistogramma bitaeniata, if compared to other dwarf cichlids, is quite aggressive and for this reason, in my opinion, this is not a species for who is at the beginning with the Apisto world. It’s not the best choice for Apisto beginners!

To stimulate the reproduction in A. bitaeniata it’s necessary to gradually lower the pH and the electric conductibility; if the fishes are wild caught, lower values are absolutely needed.

By the way, a low pH and a <100 μS/cm conductibility are recommended, not just for breeding purposes, but even for a correct housing of these animals. Otherwise, they are going to be fragile, very susceptible to various disease and quite dull colored.

In my experience with wild-caught (WC) fish I’ve obtained the courtship and the deposition spawning with pH 5.0 and a conductibility around 70 μS/cm but, unfortunately, the eggs did not hatch.
I think that the main reason are the fact that was the first spawn for those fishes and the fact that the female was quite old (around 4 years).

Here we can see a video of the courtship:

Regarding,reproduced fish, we can attest to values of pH around 5.5 with a temperature around 26 °C; with these parameters  Eddy Spriet has obtained the deposition and the hatch of the major part of the eggs.

When keeping Apistogramma bitaeniata we have to keep in mind not only the intra-specific but also the extra-specific aggressiveness.

I saw full grow A. bitaeniata male attacking Nannostomus beckfordi (not the smaller and shier between all the Nannostomus species) to reach the food and even taking side against adult P. scalare.

The tank for Apistogramma bitaeniata

The tank must provide a soil composed only by sugar size sand and a lot of wood that acts as visual barrier.

From the following video you could see the typical Apistogramma behavior: sifting the sand all day long.

Regarding plants, I suggest to use floating and semi-emerged plants, as the high level of tannins in the water and the soft light will not favor plant development.

For the hardscape is possible to use wood and stones (strictly not calcareous and with non-cutting edges).

I remind that this species lives in black water so, if the tank offers a good amber coloration, the fishes will benefit from it.
In the tank coconut half-shells or other caves (as savu pods) can’t be missing: fishes will use as spawning sites.

I wouldn’t recommend to take it as a proper example because it’s quite small (only 60×40 cm of base) with the following values: pH 5.5, not detectable hardness, conductibility 70 μS/cm.

I think that this tank is too small because, in particular at the beginning, I’ve had several difficulties to manage the aggressiveness of the specimens especially by the male.

As you can see from the photos, I had to create lots of visual barriers with net divisions of the territory using wood and large leaf plats (Echinodorus spp.).
In addition, I had to add hiding places to allow fishes to hide in the event that the situation escalate too much.

With a tank long at least 80 cm everything would certainly been more manageable easier. 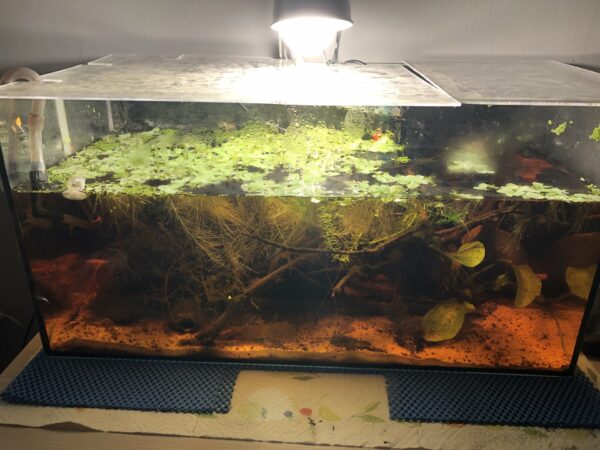 Due to the high aggressiveness, I recommend an aquarium long at least 80 cm. In this case, it is possible to introduce dither fishes as Copella spp. or Nannostomus spp.

I do not recommend large characids – as most of the Hyphessobrycon genre – due to their predatory instinct.

As you have by now understood A. bitaeniata isn’t the easiest Apisto species.

In addition to what has been said so far, the chemistry of the water is important as all the other aspects addressed: this animal likes extremely acidic water with pH between 4 and 6 with the lowest possible conductibility, but always under 90 μS/cm.

In the natural habitat the reported value is near 0: samples taken by Tom Christoffersen, in the dry season, report pH 4.71, conductibility 12 μS/cm and temperature 26.6 °C.

Lowering the pH will stimulate the reproduction. Another trick to make our fishes live better and longer is to adopt a seasonality similar to the one that there is in the nature.

A. bitaeniata comes from tropical basin so, in our tanks, I would suggest to maintain a temperature between 23 °C and 29 °C.

In my experience, I can say that wild specimens, even after a period of initial acclimatization, will continue to be reluctant to accept dry food, preferring, by far, frozen and alive food.

Another recommendation is to variate the diet as much as possible, by integrating with vegetables such as blanched peas or courgettes, because in nature their diet is not purely protein based, as evidenced in several studies.

About aquarium strain specimens, although difficult to find, they will accept the various packaged foods – which will in any case have to be of good quality – right from the start, however, it would be good practice to provide, at least a couple of times a week frozen/alive to have a more balanced and as varied diet as possible.

To stimulate fishes to spawn increase the quantity of proteins in the diet by administrating more frozen and alive food.

Due to the wide spread of this species in South American waterways and its polychromatism, a DATZ code has been assigned to the different strains of the species, or from A211 to A216.

However, more recent studies (2016) have led to the discovery of specimens of Apistogramma bitaeniata originating from two distinct sections of the Rio Apaporis basin, showing the caudal spot separated from the lateral band currently labeled as Apistogramma sp. “D9” and Apistogramma sp. “D14” – no DATZ code for them by now.

We thank Eddy Spriet for providing information about reproduction.

We are grateful to Tom Christoffersen for granting us permission to use some of his beautiful photographs. These photos are taken from his articles Collecting A. bitaeniata in Pebas and Apistogramma (cf.) bitaeniata.
These photos can be reused only with the permission of their Author, who holds all their rights and property.